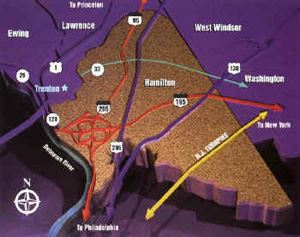 Hamilton: Not Just a Stop, a Destination

The key to Hamilton's growth and success lies in its excellent location and superior transportation network. Centrally located between New York and Philadelphia, Hamilton is a prime location for businesses, since the county overlaps 3 major markets: Suburban Manhattan-New England, the Delaware Valley Region, and the Boston-Washington corridor. This Hamilton "Interstate Highway Complex" has afforded the township a very enviable advantage over other municipalities in attracting new business. Hamilton's road network offers superior passageways to the rest of the county, state and east coast markets. Major Roadways include:

Includes the corridor between Trenton and New Brunswick; provides north-south access to many of the State's pharmaceutical, research and academic facilities.

The Trenton Bypass connects South Jersey with Trenton and Interstate 95.

Links South Trenton with Route 1, I-195, and I-295. 129 also offers easy access into and out of the City and its historical Chambersburg District.

A major north-south access road which traverses most of the State from the northwest corner southward into Camden County.

Provides access to commercial markets from Route 1 all the way to Delaware.

Enters from the southeast corner of the County, through Hamilton, Washington and East Windsor Townships providing fast, direct transport to points north, including Newark and Jersey City. 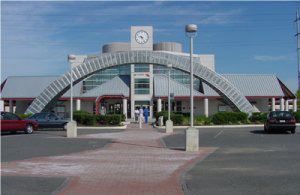 Hamilton is home to a state-of-the-art commuter rail station for NJ Transit. This station, situated near the I-295/Sloan Avenue Interchange is filling the growing demand for additional commuter facilities serving travelers along the northeast corridor line. In addition to balancing the tax base which is heavily weighted in the direction of residents, new commercial/industrial growth brings new jobs, a more active economy and improved services to the community.

Hamilton cannot afford a status quo posture, especially now while it is positioned with a solid infrastructure and the most desirable location in the Mid-Atlantic Region.